How AI Is Transforming Cyber Defense (As Seen on Forbes.com)

Enterprises are going digital to leverage business advantage from faster time to market, automation efficiencies and execution speed. The race is on to achieve digital connectedness of their entire value chains. At the same time, cybercriminals see the increasing digitization as a window of opportunity. Cybercrime syndicates are actively targeting digital ecosystems including cloud infrastructure, software as a service (SaaS) offerings and internet of things (IoT) devices. Enterprises are faced with the challenge of pushing for greater gains in business advantage while balancing the risk of cyber exposure.

Traditional cybersecurity approaches may offer only limited help. For the newly emerging digital world, cybersecurity needs to be reimagined.

Cybercriminals are using ever more innovative approaches to drum up new threats for which older security technologies are inadequate.

Enterprises have scaled their degree of digital operations and data has grown exponentially with this scale. However, scaling security with conventional approaches has been a challenge for most organizations.

Conventional security systems use rules and signatures, together with threat intelligence for detecting threats and responding to them. This provides some capability for managing incidents by pairing them with known problems. However, they are past-centric and rely on known attacks and known attackers. New and innovative attacks create blind spots for these systems. In addition to this, the volume of security alerts often swamps out security teams. Relying on either conventional security technology or human expertise alone to handle this new situation will not work. We need a fresh approach and artifical intelligence (AI) drives the new wave to counter cybercrime.

What AI Brings To The Party

With the right AI software, computers can now keep up with big data that cybersecurity systems produce. AI algorithms are very good at identifying outliers from normal patterns. Instead of looking for matches with specific signatures, a tactic that new age attacks have rendered useless, AI blends with cyber by first making a baseline of what is normal. From there, deep dives into abnormal events can be made to detect attacks. This type of detection usually falls into the area of unsupervised learning algorithms. The other approach in AI is to use supervised algorithms to detect threats they have been trained on. An example of practical supervised learning is for detecting advanced malware that is new or has mutated from an older one. We can provide thousands of instances of malware code as learning data for supervised algorithms. They can then determine whether a new piece of code is malware based on this learning.

A Partner In Reducing Workloads For Security Operation Centers (SOCs)

In addition to detecting complex attacks, AI lets security teams scale their operations for monitoring cyber systems and detecting cyber breaches, incidents and issues. This is where security teams struggle to perform adequately. Today’s systems generate so much security data that human experts are rapidly surpassed.

People cannot find the attack elements fast enough or reliably enough. By comparison, computers excel at these operations. AI then helps them to make sense of what they find. It can even help by offering suggestions to security teams of processes to handle them.

Human experts still do a better job of deciding which actions are finally required and how best to protect business and legal priorities. Humans also provide the common sense that computers cannot, to ensure that result from AI is also meaningful in the business context.

Artificial intelligence and human intelligence must work together for the best possible results. Meanwhile, advances in deep learning, a step beyond machine learning, use techniques that mimic the working of the human brain to help AI think and reason better. We are still at an early stage, but AI will be an increasingly valuable partner in the years to come for combatting and outwitting our cybercrime adversaries. 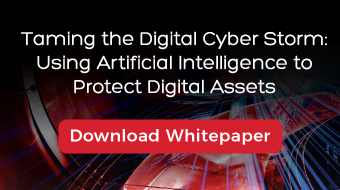 This article was originally published by Forbes. It can be viewed on  https://www.forbes.com here.